View Item
JavaScript is disabled for your browser. Some features of this site may not work without it. 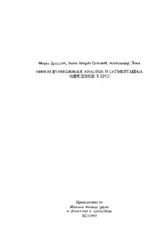 The paper deals with the project of the new etymological dictionary of Serbo-Croatian, Etimoloski recnik srpskohrvatskog jezika (ERSJ) which is being carried out by а team associated with the Serbian Language Institute of the Serbian Academy of Sciences. The term Serbo-Croatian (srpskohrvatski) in the title complies with the historical orientation of the dictionary and the fact that the language of the Serbs, Croats and other nations speaking it \ is originally the same, thus leaving aside present-day divisions based on different national feelings. Apart from the basic lexicon, ERSJ comprises dialectal material from all Serbo-Croatian vernacular speeches, the point being on the Stokavian dialect, that of the literary language. Dialectisms that can be interpreted in a narrow areal context and on а shallower chronological level, be they native or alloglotic in origin, the international lexicon as well as that of various terminologies and the like are not included in ERSJ. The selection o...f entries combines both the "single-word" and the "word-nest" principles. The tripartite segmentation of the lеmmа in ERSJ mirrors the procedure of etymological pursuit on various levels of language positioned horizontally and vertically, i.е. on synchronic and diachronic axes, as well as moving through different epistemological levels, from the historiсаlly recorded to the reconstructed one, thus departing from the level of positive linguistic facts and descending into the realm of the hypothetical. Different levels of readers of the dictionary are taken into account too, the first two parts of the lеmmа aiming at а wider range of users while the third one is reserved for the specialists. The first part of the lеmmа remains on the starting, Serbo-Croatian level; it includes the elementary etymologisation (comprising identification of different dialectal and historical forms of the head-word and subordination of its obvious derivatives). The second part conceives the word јп а broader perspective that is expanded laterally toward other convergently and divergently related idioms and downward to the prehistoric past of the language. The third part is optional. Here the etymological opinion adopted in the second part is discussed and balanced by quoting alternative interpretations graded by degrees of probability.